"Secret of a Happy Life By Prabhu Gaur Gopal Das"

Gaur Gopal Das is an Electrical Engineer, having studied at the College Of Engineering, Pune. After a brief stint with Hewlett Packard, he decided to upgrade his career to be a life coach. Consequently in the year 1996 he joined ISKCON & has been very active in this field ever since. Serving in the leadership at the ISKCON Chowpatty branch, Gaur Gopal Das has been speaking at various prestigious academic institutions in India and abroad for over 2 decades. He has been very actively involved in guiding leading doctors & medical professionals across the globe. Corporate firms like Google, Sales Force, Infosys, Barclays, Bank of America, E&Y, Ford have not been an exception in his areas of continual help & guidance.

Gaur Gopal Das also regularly visits the members of the Rotary Club & Lions Club for talks and guides various top ranking celebrities and corporate leaders. He has also spoken at several TEDx events. During his 2016 visit to London, he gave a talk at the British Parliament.

He was awarded the 2016 Rotary International's Super Achiever Award for outstanding contribution in field of spirituality and inspiration. He was awarded 'Danveer Karna Award' by KIIT University to recognize his selfless contributions to promote the ideologies of 'Art of Giving' and compassion throughout the world.

He was recently awarded ‘The Ideal Young Spiritual Guru Award’ by the Indian Student Parliament, MIT for his remarkable contributions in offering spiritual guidance to the world at such a young age.

Based on the timeless wisdom coming down from ages, his talks make the audience think deeper and find simple solutions to difficult problems 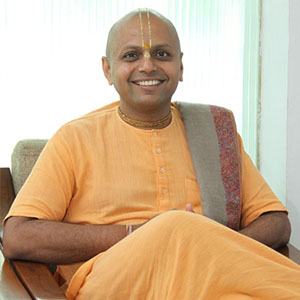